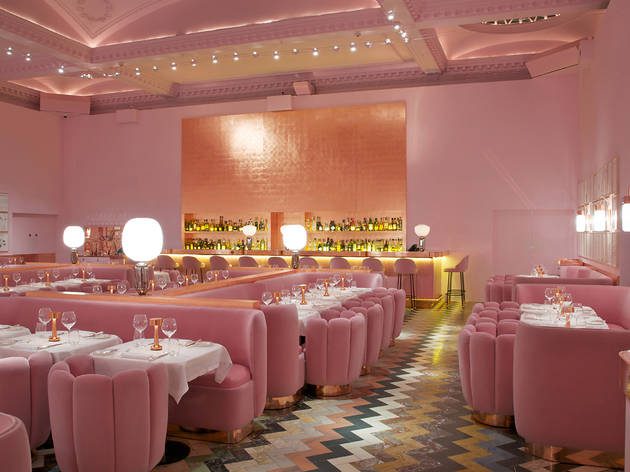 COULD THIS BE THE QUIRKIEST RESTAURANT IN LONDON?

If Wes Anderson directed ‘Alice in Wonderland’, it would probably look a lot like the interior of ‘Sketch’. To call ‘Sketch’ a restaurant seems reductionist-  the reformed 18th Century Townhouse isn’t just an experience for your taste buds, it is a full-sensory affair.

With pink interior, velvet shell shaped seats, David Shrigley’s playful artwork covering every wall, and pod shaped toilets that look like they were designed for aliens, ‘Sketch’ is certainly a treat for the eyes, and you would be forgiven for questioning whether it’s a case of style over substance. Considering the rave reviews it has tucked under its pink studded belt, probably not.

When it first opened, there were whispers of it being a fad. Sceptics argued that the novelty would wear off. Twelve years on and boasting four dining rooms under the same roof, it’s busier than ever – in order to secure a spot in their famous ‘Gallery’, you have to book in advance.

We tested their take on a quintessentially British afternoon tea with champagne. Adding bubbles ramps up the price from £59 to £79 a head, but to scrimp at this stage seems silly. ‘Sketch’ was extra before extra was even extra. But if you do want to skip the alcohol and opt for tea, ’Sketch’ has an impressive tea menu included in the standard price, and you can try as many flavours as you like during your sitting.

Service was fast, I think, although they could have taken hours to approach us and I might not have noticed – time doesn’t exist when you are Alice in wonderland. Before our food arrived a ballerina appeared out of nowhere, twirling  In a period where a lot of restaurants play it safe – when the prospect of a bad TripAdvisor review outweighs the risk of trying something new- ‘Sketch’ is bold in it’s non-convention, and it’s this attitude that makes it so successful. By not following the rules on ‘how to please’, it manages to please everyone.

Before we laid eyes on the towers of cake and sandwiches that were to come, mini starters in the form of cavier (or a delicious cauliflower equivalent for non fish eaters) were brought to our table. Afternoon tea diners also have Sketch’s take on egg and soldiers to look forward to. The egg yolk and delicate cheese topped slices of lightly toasted bread is melt-in-your mouth delicious, and definitely put to shame any previous, and, I suspect, future, egg and soldiers experience.

So far, everything had been so far removed from any previous dining experience I’d had that I was unsure of what would constitute an ‘afternoon tea’. When the familiar triangular sandwiches, filled with salmon and cream cheese, coronation chicken and cucumber ricotta emerged I was slightly taken aback. For somewhere that has broken so many rules, it delivers an authentic experience in terms of afternoon tea. Well, almost – I spotted dainty tart, which turned out to be foie gras tartellete which was every bit as deliciously rich as it sounds.

Next up were the sultana scones, and I can honestly say that these are some of the best scones I have ever tried. They were warm, fresh and the butter and jam oozed through them. The best part is that they were light and fluffy, meaning that when we moved onto dessert we weren’t stuffed.

I was gifted with an insatiable sweet tooth, so I didn’t exactly hold back when a full trolley of cakes arrived in front of me. Macarons are my new favourite – partly due to the fact that they are borderline impossible to make yourself (seriously – have you ever tried to make your own macarons??) and these did not disappoint. Other notable favourites included the batenburg and the violet and raspberry choux, although cakes change slightly based on season.

“Happy Easter always brings… Such a lot of pleasant things!” Afternoon tea, It’s always been quite the tradition, a past time quite whimsical… A tier filled with sandwiches and treats… and more?… A trolley to tempt, with a "hot cross bun" too… Easter afternoon tea 30 March – 2 April 📞 0207 659 4500 #easterafternoontea #sketchGallery #pink #eastereggs #hotcrossbun #carrotontop #sketchlondon #EATMUSICDRINKART

From start to finish, ‘Sketch’ is an unforgettable experience. The waiters were helpful, the food was delicious and the only problem with the whole thing is that you might find yourself slightly disappointed by every restaurant thereafter. Style and substance go hand in hand in Sketch, and the question isn’t if we’ll return, but when.